For Canada Day, July 1st, I spent my day at the NAC a.k.a., the National Arts Center of Canada, with my dad.

When we entered for the first show in the morning,  Unisong performed.  Unisong is a group of young singers from all across Canada.  It is a choir of about 380 people.  So cool!  They sang the National Anthem of Canada, a few Aboriginal-Canadian songs,  French songs  and  English ones .

The host for the all-day show was famous Canadian actor Peter Duschenes.

He is very entertaining and has a funny bilingual accent.

This was Unisong at the NAC on Canada Day.

Next, we went to Wellington street (the street that stretches in front of the Parliament) to wait for the Governor General David Johnson to arrive in his horse carriage.  He was coming to celebrate the 145th anniversary of Canada on the Parliament Hill.

This is the Governor General David Johnson and Mrs. Johnson

The carriage was pulled by the RCMP ( Royal Canadian Mounted Police).  It was awesome!  Except for the fact that the horses did their business in the middle of the road.  Other than that, it was great and I got to see the Governor General in person for the second time.  The first time I saw him was at a ice rink at the Rideau Hall.

After that, we went into the Chateau Laurier to sit for a while.

Next, we went back to the NAC for an orchestra and Unisong again.

The orchestra played music and the choir sang.  Every time we entered the room, the seats would be pretty much full.  We thought we’d come really early but the seats were still half full.

In the evening, we went to the NAC again to listen to a famous fiddler Natalie MacMaster And many famous musicians from Canada and other countries.

When she entered the stage, it was obvious that she was pregnant.  Natalie is from Cape Breton and she’s really good at violin!  She can tap while she plays and her oldest child who is 6 also tapped while Natalie played.  When she played the last song, everyone stood up (including me) and started clapping our hands to the beat.  Natalie is now my favorite fiddler.

On our way out of the NAC, we met Jim Watson, the Mayor of Ottawa, on the square of the National War Memorial.  He recognized my dad.   He’s been at our house in 2010 for Municipal Election Affair.

At night, my dad and I watched fireworks on the Parliament Hill.

During the fireworks, someone took my picture.

We had to go home by bus and the buses were cramped!  At one stop, there would be at least 2oo people.   But, we got a place to sit/stand.

The St. Lawrence Seaway is the passage to the Atlantic Ocean for the Great Lakes.  On the Canandian side, the St. lawrence seaway passes Ontario and Quebec.  On the U.S.A. it’s New York State. 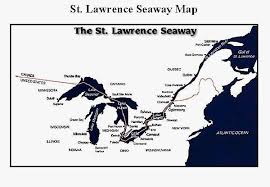 A French explorer named Jacques Cartier crossed the Atlantic Ocean looking for a water route to China and Japan.  Instead, he found what is now the St.Lawrence River.  The river is the second longest river in Canada.  The Mackenzie River is the longest.

In March 1941, The U.S.A. and Canada signed the St. Lawrence Seaway agreement.  The two countries would be responsible for improvements for their waters.

The St. Lawrence Seaway is now one of the world’s great trade routes.

Lake Erie is the fourth largest lake.  The lake is surounded by the U.S.A. states, Michigan, Ohio, Pennsylvania and New York.  The Canandian province Ontario.

Water pollution is a huge problem in the great lakes.  Too much pollution can cause a plant called algae to multiply in the lakes.  Since lake Erie is so shallow, it’s easily polluted.  A river named Cuyahoga once caught on fire because of all the pollution!

Lighthouses are also a must see thing on the Lakes.

Thank you for a fantastic year.  We’ve really had the best year and I know I will see most of you next year, but don’t be strangers.  My new office is in the Fish Bowl and I love visitors, so stop by to say hi and give me hugs!  Feel free to make posts over the summer.

Thank you for all the kind words today, lovely gifts and hugs!

Have a great summer!  I will be in Edmonton/Jasper in a weeks time – woo, hoo for holidays!

WOW – what a smorgasbord of great food!  Thank you, thank you, thank you.  We had plates, forks, cups, napkins, drinks and all the necessities, plus and I hope I don’t forget anything, but 2 types of Asian noodles, 2 types of dumplings, 2 trays of sushi, samosas, chapati, Scotch shortbread, German sausage, Bannock, Matzo Crackers, Strawberry Rhubarb pie, plantain chips, some sort of deep fried goodness (hot dogs in bacon with brown sugar) and a cookie that even Shorty didn’t know what it was called, some sort of Asian coconut delight and Gingerale and apple juice to wash it all down.  Students took turns sharing what their dish was and any common traditions they celebrated, described what they were wearing if they did….  I learned a lot, like did you know that in two different cultures they throw water or colored water at each other as part of celebration.  The kids told me this was just for fun, but I wondered if there was a purpose behind it.  Anyhow, I enjoyed it so much, I asked Phoebster and Sabrinur if I could take the leftover noodles home to go with my beef stir fry and Vliet911 chipped in by letting me take some more dumplings home, so my supper was well taken care of and my husband and kids were very happy.  The kids favorite treat though was when they each had a sheet of Matzo for their afterschool snack – thanks to Wolfie for those!

This will be my last post this school year (I might have a short post or two over the summer but those will be short posts).

I want to congratulate vulcan ninja on the best written posts, at least in my opinion.   Some of you might be asking themselves why am I congratulating vulcan ninja for most well written posts if I have the most posts.  I might have lots of posts but lots of them are one sentence and that doesn’t count as a post.

Quirkyteacher, will you keep the blog up next year?  I am so happy quirkyteacher did this this year.  I hope everyone had fun on the blog this year.

Have a great summer everybody!

This year’s BBQ was HOT!  It was pretty humid, too, so it seemed to me that we didn’t have as many people at the barbeqcue, but it was still a success.  Those who came had a good time.

Thanks to Wolfie and Vliet 911 for manning the milk bag mat table.  Even though we didn’t get any new volunteers, I think it was very important for the school to see what it involves.

Nerf man thanks for manning the ticket station, so that people could buy tickets to soak me.  You can see pictures of me getting splashed and both Jazz and Devo trying to hit me.

On a side note, I met Mr. Toft this weekend at the Pert Kilt run, so that was pretty cool.  He is the teacher who runs the blog with the podcast.

You know Revenge, Fallen Kingdom but do you know these? I do not own any of these songs.

Lyrics
======
Steve was his name
just a man from block land
he just dug, what he could
and hit wood with his hand
but he soon found out that he was much, much much more than a man

When he found a small cave
there was a strange tall man
he told Steve that he was
Enderborn, he must save
the world from the greatest threat it has ever seen,

“Now you must go to slay the Enderman
to collect ender pearls to fulfill the plan
destined to save the world from an ender dragon
and we’ll see, on this day, that a legend began”

Steve now he knew
that he was Enderborn
ventured home made a sword,
and then left before dawn,
and he slayed Endermen until he had enough…

He searched far he searched wide until he found the Stronghold
so he could find the end and do what’s foretold
used the pearls that he gained to open the door
to the end, save a world, that he cares so much for

Right through the door
was a world, filled with black
Endermen, they stood guard and prepared to attack
but he climbed the black towers and smashed the crystals

Dragon flies, dragon turns, then swoops down for Steve,
standing calm, cause he knows, he has a trick up his sleeve
swings his sword, like a Nord, on the dragons big snout
dragon turns, flies away, with a roaring loud shout

Dragon flies, dragon turns, swoops for one last fight
grabs his bow, cause he’s pro, Steve hits him mid flight
dragon dies, dragon fades, said he glew like the sun
so its said, on this day, that a legend began

My door is open
Skeletons and zombies
I am broken, as they walk all over me
But if I keep on building walls, maybe they’ll stay away

(pre-chorus)
Think fast, it’s got to last if you’re gonna make it through the rest of the day
I’m trapped, I can’t go back, I’ve made the choice to stay

I am no one
I have no place, no one relates
And there is no sun
As the night covers this space
But I beg you, please please don’t let this life go to waste

You don’t really need lyrics to this.

Hope you enjoyed the music!

-Ninja runs to shadows! Nobody knows he was here, except for a  pig, a guy, an ender born and a dwarf either from that no one knows.

My final avatar for this school year is Kirby because I just love him.

It all started with a class, with a bunch of kids that barely knew each other and told themselves that this year will be a long one. Then it was more than that, we then became one class, not two, one. Enjoy the post!

Goodbye, my wonderful classmates. It is time when we all (not really) go our own separate paths. It was an honor to be in Vulcan ninja’s choice board. Also, to experience something interesting each pasting day. This year was the most fun year ever because we got to watch movies on Fridays, have a book club, write anything we want in our journals, have the talking circle and so on. This year was also great because our

magnificent teacher, Quirkyteacher, was opened to us and very understanding, mangamath, the blog. Whenever someone was in trouble or something, she’ll always help out.

Welcome to your brand new blog!

This is a sidebar and can be changed in Widgets in your dashboard.

You can also modify number of sidebars in theme options!

NOTHING - School is out and sadly 5/6A - otherwise known as One Quirky Class or District 56 is over - sniff!

Shelfari: Book reviews on your book blog
Skip to toolbar